THE BARTHOLOMAEUS PROJECT
Bartholomaeus​ of Salerno 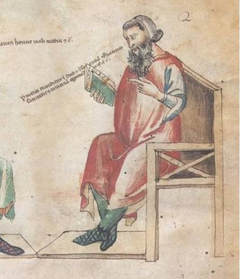 Paris BNF lat. 6823, fol. 2r
Master Bartholomaeus (fl. ca. 1150-1170) was by any measure a successful medical figure, both as a practitioner and as a teacher and author. His Practica  or handbook of therapeutics survives in at least 20 full manuscripts, and many more of fragments, extracts and vernacular translations. Bartholomaeus was also a teacher, who lectured on the Articella. The Articella was a stable anthology comprising works by Hippocrates (Aphorisms, Prognosis), and two Byzantine texts on diagnosis by urine and pulse by Theophilus and Philaretus respectively. The whole ensemble was prefaced by an introduction or Isagoge to Galenic medicine by "Joannitius", i.e. Hunayn ibn Ishaq. The Articella  was assembled around 1100, and used for formal teaching of medical theory through lecture and commentary. Bartholomaeus is the first named author of a full suite of commentaries on the Articella, and the first to include Galen's Tegni as part of the anthology. Historians like Paul Oskar Kristeller, Luis García Ballester, Danielle Jacquart and Irene Caiozzo have remarked on the philosophical sophistication of Bartholomaeus' commentaries, notably their precocious use of Aristotle. His Articella commentaries survive in an impressive 28 manuscripts – vastly more than those of any other 12th or early 13th century commentator on this anthology.
Bartholomaeus may have taught other texts beside the Articella. A commentary on Constantine the African's De gradibus has recently been identified as by Bartholomaeus, and it is possible that he is the author of the anatomy text known as the Second Salernitan Demonstration [Saffron, Maurus 8-9]. A short essay on urines is ascribed to Bartholomaeus in at least two manuscripts: Cambridge, Gonville and Caius College 159/209 and Vatican Library Pal. lat 1304. That being said, there is no clear indication where Bartholomaeus taught. Bartholomaeus is often referred to by modern historians as "of Salerno", but no medieval source refers to him this wat. Gilles de Corbeil (d. ca. 1225) names several of his teachers in Salerno, but Bartholomaeus is not among them, though Gilles was probably studying medicine there in the 1160-1170s. Either Bartholomaeus was dead by then, or he was not headquartered in Salerno. Bartholomaeus' letter to Peter the Venerable says that he will send his socius (associate, assistant)  Bernard with medicines to Cluny; this is considerable sacrifice on his (Bartholomaeus') part, since Bernard handles the daily running of Bartholomaeus' clinic, and it will taken Bernard more than a month to journey to Cluny and come back. At the rate of 30-40 km per day on horseback, Bernard could have come from as far north as Paris, or as far south as Lombardy if he took two weeks to travel to Cluny, and two weeks to return after a short sojourn in the monastery. But the direction in which Bernard traveled is not stated.

A final testament of Bartholomaeus's success is his portrait, which appears in MS Paris BNF 6823, a copy of a work on the medical use of plants written by the 14th century Italian author Manfred of Monte Imperiali. On fol. 1r is an author portrait of Manfred, teaching his students. Folios Iv-2r, however, contains a group portrait of medical authorities conversing with one another – a variation on the classical theme of the "conversation of the philosophers". The two figures at the top of fol. 1v are conversing about the Articella, in fact, they are quoting from the Articella. On the right, Joannitius reads the opening words of his Isagoge "Medicine is divided into two parts, theory and practice…" and Hippocrates responds with the incipit of Prognosis, another of the works included in this teaching anthology. Below, Hippocrates appears once again, with the Aphorisms (another Articella book). He is speaking  Galen, the author that Bartholomaeus brought into the Articella. On the facing page, the same conversational theme continues along the bottom with Porphyry and Averroes, who are debating the virtues of moderation in eating. Above the debating pair are two men whose position and postures echo those of Joannitius and Hippocrates on the facing page. On the left is an unidentified figure, possible Mesue (the 9th century Arab writer on pharmacy Yuhanna ibn Masawaiah, or Yahya ibn Masawaih al-Mardini. On the right is Master Bartholomaeus – the only contemporary Western figure in the group. Like the others, Bartholomaeus is only identified by the words he is speaking, which are the opening words of his Practica : "Practice is divided into two parts, the knowledge of how to preserve health, and of how to cure illness." The parallel between Joannitius and Bartholomaeus is very striking, even verbal. But what is important from our perspective is that Bartholomaeus is linked both to the elaboration of  Articella and its "theoretical turn".

An edition of the medical writings of Bartholomaeus, and particularly of the innovative Articella commentaries, is clearly a desideratum for our understanding of the development of medical thought, and of an academic style of teaching and learning medicine, in the twelfth century – not to mention recovering the words of a celebrated teacher and clinician. This project seeks to fulfil this need by editing Bartholomaeus' Articella commentaries and Practica.​